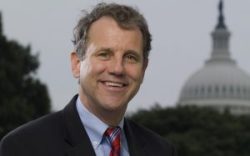 Sen. Brown first condemned President Trump and his efforts to invalidate the entire Affordable Care Act (ACA). If successful, people would have been effectively kicked off of their health care in the middle of a pandemic, including those with pre-existing conditions. Had President Trump succeeded in his efforts, 23 million Americans would be without health insurance. Sen. Brown continued, saying they are working on legislation to expand medicaid so everybody is protected, especially during the COVID-19 pandemic. He then spoke about himself and Sen. Rob Portman (R-OH) urging the COVID-19 Joint Acquisition Task Force (JATF) to prioritize the procurement of American-made PPE and create measures to incentivize the reshoring of PPE in the United States. Lastly, Sen. Brown discussed holding Facebook accountable for promoting union-busting tools and called on them to encourage workers, including Facebook employees and contract workers, to organize and advocate for themselves through a union.

Associate with Kelley & Ferraro, LLP., Marty Mason spoke about the 3M ear protection litigation for veterans. He explained how the military used to issue 3M noise cancelling ear protection to all service members. As soldiers complained about the equipment falling out of their ears and being difficult to keep in place, the equipment proved to be ineffective. Mason said that due to the malfunctioning ear protection, many soldiers left the service with partial or total hearing loss or tinnitus. Thanks to a 3M whistleblower who came forward to the Department of Justice saying the company knew of the defects, the case has gained attention from many firms. Kelley & Ferraro are building a litigation case to help those affected by the faulty ear protection receive financial compensation. He also discussed the ongoing case with Roundup, a common weed killer.

1 thought on “U.S. Senator on Protecting the Affordable Care Act”