Ielmini first spoke about what fire stop and smoke seal does and how it protects buildings. He said when buildings are constructed, rooms are separated into partitions or compartments and have smoke seals in them. This is done to prevent spreading to other rooms if a fire were to break out. Ielmini explained that fire stop and smoke seal is important because it can limit fire and smoke damage as well as potentially save lives. 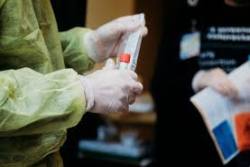 Sharon Johnson, a writer for The Progressive spoke about her latest article, “On the Front Lines.” Her article highlights community health centers and how they have provided healthcare in the nation’s most underprivileged neighborhoods. The patients at healthcare centers are those who are most affected by the pandemic. The centers help provide food, social support, teledoctor help and much more. Johnson mentioned that the centers operate on tight budgets and as the number of patients rises the centers will become stressed. Thanks to an early relief bill of $100 million and an additional $2.2 trillion from the CARES Act, the healthcare centers are able to administer treatment to the large number of patients.