On the 75th anniversary of the D-Day invasion, Gorn remembers the brave soldiers who were part of the most significant event to help turn the tide in the Allies’ favor during World War II. Gorn believes that the younger generation is less aware of the events that happened on D-Day because of the rise in focus on STEM (science, technology, engineering and mathematics) study over history. Gorn also talked about students studying D-Day at the beaches of Normandy, and learning about the “silent heroes” who did not return home from that invasion.

Jim Porcaro, partner at Schwarzwald, McNair and Fusco LLP spoke with AWF about union-side lawyers and what they do to protect worker rights. He also discussed the most recent Supreme Court ruling with the Fair Labor Standards Act and employer status. 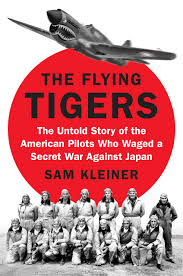 Sam Kleiner, author of The Flying Tigers: The Untold Story of the American Pilots Who Waged a Secret War Against Japan, gave an overview about what his book was about. On the 75th anniversary of D-Day, he also gives homage to his grandfather who was a B-25 navigator during WWII.