Hugo Meunier, author of Walmart: Diary of an Associate, talked about what he learned about Walmart while undercover on the April 22 edition of America’s Work Force. 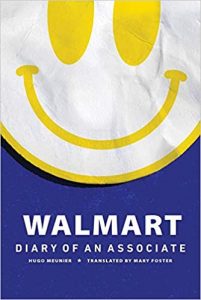 In 2012, Meunier went undercover as a Walmart associate for three months to investigate and record how the employees were treated. He stated that there was a brainwash type culture where employees were trained to denounce bad employees, sell out other employees if they don’t do things the Walmart cookie cut way, and to become “yes-men” to their superiors. Meunier touched on how employees would have individual meetings with their managers where they would push an anti-union agenda onto their workforce, saying that unions are only in it to work for themselves, not the company, and that is why the employees should not unionize.

Robert Zirkelbach, executive vice president of public affairs for the Pharmaceutical Research and Manufacturers of America (PhRMA), spoke with AWF on April 22 about changes to medicare and prescription prices. He said that there is new legislation coming out called “Medicare Part B,” which is a program to help seniors receive discounts on their prescriptions, whether in a hospital or from their doctor. This program would increase access to complex medicines as well as allow the government to price prescriptions like other countries do.

Larry Willis, president of the Transportation Trades Department was the last guest on the April 22 edition of AWF. Willis spoke discussed union busting moves in the aviation and rail work industries by people introducing legislature to make it easier to decertify unions in these sectors. He also talked about transit workers being assaulted on the job and discussed potential protections to keep them safe.

AWF host Ed “Flash” Ferenc discussed the ongoing Stop N Shop strike and the massive amounts of support that the workers are receiving during their strike.