Martin O’Malley, former Mayor of Baltimore and author of the book “Smarter Government: How to Govern for Results in the Information Age” spoke with America’s Work Force on Feb. 26 about governments keeping up with the technology of the times. 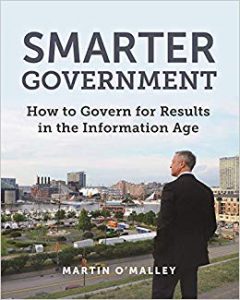 O’Malley spoke about effective ways that cities can be led thanks to new and improved technology that is accessible to people. He talked about how using Geographic Information Systems (GIS) technology can improve safety around cities. By gathering information regarding crime rates, cities are able to distribute appropriate resources to certain areas at times where crime is predicted to be high. With improvements in technology, O’Malley said that we need to find ways to utilize it to our advantage to make the quality of life better for people and keep citizens happy. He also talked about the stances on issues, policies and follow through on promises made by political candidates.

Mike Walden, former Teamster and president of the National United Committee to Protect Pensions (NUCPP), spoke about multi-employer pension plans. With pensions being threatened, the NUCPP is working hard to get the Senate to pass the Butch-Lewis Act, which is a bi-partisan act passed by the House of Representatives. He stressed that we need to protect pensions so that money isn’t taken from people who have been working their entire lives to build their pension and depend on it upon retirement.

AWF host Ed “Flash” Ferenc spoke about a Propublica article detailing a story about postal service workers who were punished or even fired, because they were hurt, called in sick or had other disabilities.