Rep. Patton spoke about Ohio passing House Bill 308, which effectively allows first responders to receive worker’s compensation for PTSD without requiring a physical condition that ultimately led to PTSD. He told a story of a firefighter responding to multiple emergency calls where victims died in his arms and the major toll it took on his mental health. The firefighter ended up going through a mental downward spiral and eventually took his own life. Rep. Patton stated that had this bill been passed earlier, the firefighter in the story would have had access to resources such as counseling, therapy or enough time off to recover. He also spoke about EdChoice and school vouchers and how they affect different communities. 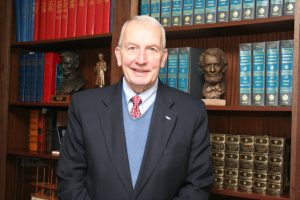 Frank Williams, former Chief Justice of the Rhode Island Supreme Court and nationally known Abraham Lincoln scholar, spoke about Abraham Lincoln and events during his lifetime. He explained how President Lincoln was a great leader who believed that everyone had the right to rise and the opportunity to succeed. Williams also talked about Lincoln’s leadership during the Civil War at round table meetings. Lastly, he provided small, lesser known facts about Lincoln, such as how there are 16,000 books written about him.