Rep. Patton discussed House Bill 144, which takes away the requirement for registered nurses to work mandatory overtime hours in order to continue their employment with their hospital. One major problem hospitals think they have been facing recently is a shortage of nurses, when in reality, they have been having scheduling problems, over scheduling the same nurses, overworking them. He said that the problem with over scheduling nurses is that it results in a quick burnout, especially with the high demands and responsibilities that come with the job. Rep. Patton said by forcing these nurses to work mandatory overtime, they are taking away these nurses potential of catching up on rest, getting back to their normal lives outside of work, keeping up with their family responsibilities and more. HB 144, if passed, will make it so nurses will not be forced to continue working mandatory, but rather voluntary, overtime hours in order to keep their jobs. Rep. Patton also talked about the plastic bag ban in Cuyahoga County. 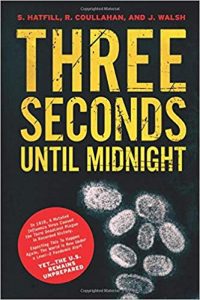 Dr. Steven Hatfill, author of Three Seconds Until Midnight, discussed the potential of another influenza epidemic. He talked about the 1918 pandemic and how it took the lives of hundreds of millions of people and how there is a strong potential of another deadly flu outbreak. When talking about the 1918 pandemic, Hatfill said that it started in Kansas, and by the time it made its way over to Europe, it had mutated so quickly that doctors and scientists were unable to figure out how to kill off the flu. His book discusses that with the population density that has dramatically increased since 1918, the U.S. needs to take several major steps to prevent or improve readiness for the next major lethal pandemic.