Jennifer Gaddis, assistant professor at UW-Madison and author of The Labor of Lunch spoke with America’s Work Force on Sept. 17 about getting better school lunches in schools. 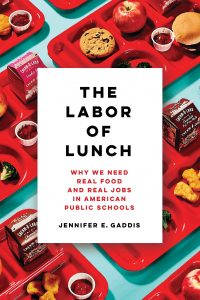 Gaddis talked about bringing in better food for school lunches and how it will benefit not only the kids, but also the workers. She said that by having schools switch over to non-industrialized, the food will be better quality, and better jobs could be made out of it. Gaddis spoke about cafeteria workers and how they could have better quality jobs if there was quality food to give the children because they would spend more time working to make the food, rather than providing frozen meals. Workers would see higher wages and more hours, while the children are provided higher-quality and nutritional food. She also discussed teachers organizing free school lunches for a school’s less fortunate children.

Melissa Cropper, president of the Ohio Federation of Teachers (OFT) spoke with AWF on Sept.17 about affordable housing for teachers. She discussed the large amount of turnover in teachers in Mcdowell County, W.V. because they cannot afford to live in the area. Cropper said that the county is testing out an affordable housing plan for educators in the area in hopes they will be able to retain their teachers. She also spoke about the Teacher Health and Wellness Act. The purpose of this act is to assist in reducing teacher’s stress to make sure they are able to do their job to the best of their ability.

AWF host Ed “Flash” Ferenc spoke about the United Auto Workers at General Motors plants across the United States going on strike. He said that there are over 49,000 workers participating in the strike.