Shane Smith of the International Union of Painters and Allied Trades spoke with America’s Work Force Radio Podcast on July 23 about a 16-year old who fell to his death while working on a construction site in Nashville.

Ramirez fell off scaffolding to his untimely death while working for Cortez Plastering in early July. Smith said the boy was working 120 feet in the air when he accidentally fell off the scaffold.

Smith said his death was ruled an accident, but the accident itself came with concerns. What was a 16-year old doing on a jobsite without proper training?

According to Child Labor Provisions of the Fair Labor Standards Act (FLSA) for Nonagricultural Occupations, the accident had two major Hazardous Occupation Order violations based on his age. According to Hazardous Occupation Orders, a 16-year old is not allowed to operate power driven hoisting apparatuses, such as the hydraulic scaffolding system used in the incident or work on roofing operations, both of which he did during the accident.

The Occupational Safety and Health Administration (OSHA) are investigating the accident to find out what allowed a 16-year old to commit these violations.

In the wake of the accident, Cortez Plastering was fined $5,000 dollars for their negligence.

Smith concluded his time on the podcast by discussing what can be done to prevent these types of accidents from happening. He said having a union presence would ensure workers are thoroughly trained with the equipment they are using and safety standards are met.

He also said companies need to be held liable for their actions and face punishment when standards are broken. 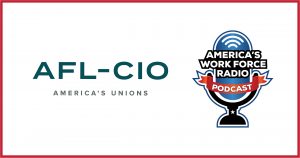 AFL-CIO Government Affairs Director Bill Samuel talked about the push to get the HEROES Act passed.

He said the bill passed the house and is now sitting on Senate Majority Leader, Mitch McConnell’s desk. Originally, Democrats thought it was dead on arrival and Republicans would not be in favor of another stimulus, but Sen. McConnell may change his mind.

Republicans argued that signing off on more stimulus checks for Americans would negatively impact the economy, but that something needs to be done to keep our economy alive. President Trump proposed a payroll tax cut, but that would take away money keeping social security alive.

AWF Radio Podcast host Ed “Flash” Ferenc spoke about the Dallas Morning News newsroom pushing to unionize in response to the lack of personal protective equipment and security provided to them while covering the George Floyd Black Lives Matter Protests.