James Hoggan, co-founder of DeSmogBlog and author of I’m Right and You’re an Idiot spoke with America’s Work Force on Aug. 30 about political parties reporting news about the political climate. 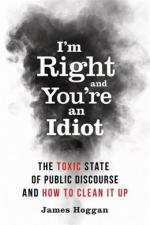 Hoggan talked about how political parties twist stories to favor their agenda and discredit the opposing party, creating a myopic point-of-view on issues, rather than reporting an issue for what it really was. He said that political parties do not know how to properly communicate with each other or find common ground, and would rather tear down the other party’s image instead of talking through major issues and communicating properly with one another. Hoggan said that social media is another big problem when it comes to reporting accurate news stories. Social media is great in the sense that it gives anybody the ability to voice their opinion, however, there is no way to filter out what may be true or not. As a result, people could begin to believe something that is not remotely true and become outraged at a completely fabricated issue. Hoggan stressed that people need to do thorough research on issues instead of making knee-jerk reactions in order to properly form an educated opinion.

Steve Rosenfeld, editor for the Independent Media Institute spoke with AWF on Aug. 30 about the need for the United States to improve their voting systems for the upcoming 2020 presidential election. He mentioned that with how improved technology has become, there should be a foolproof way for voters to be able to cast their ballots without any issue whatsoever. Rosenfeld said that we have the technology to accomplish this task, the political parties just need to find a process to agree on and then move from there.