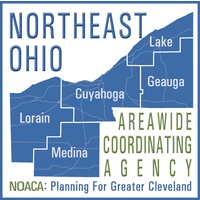 Gallucci first spoke about the NOACA and what they are capable of. She said that they cooperatively develop and implement plans to ensure that travel and travel plans throughout the region are safe, cost-effective and environmentally sound. Gallucci then spoke about the hyperloop train, a train capable of reaching speeds of up to 760 mph, making travel time from Cleveland to Chicago about a half hour trip. She explained that the NOACA is the first and only organization to complete a study on the statistics and feasibility of a hyperloop train, and when the public can expect progress to be made on the project.

Bill Samuel, legislative director of the AFL-CIO spoke about the United States-Mexico-Canada Agreement (USMCA). He discussed pensions plans, more specifically multi-employer pension plans and what needs to be done to fix it. Samuel talked about the importance of protecting social security and working to make it stronger. He also spoke about non-union workers who are receiving union member benefits without paying dues.

AWF host Ed “Flash” Ferenc spoke about the nationwide density of union members in the United States, and the misclassification of workers at Uber in California.