David Ranney, author of Living and Dying on the Factory Floor spoke with America’s Work Force on Nov. 29 about working conditions in factories. 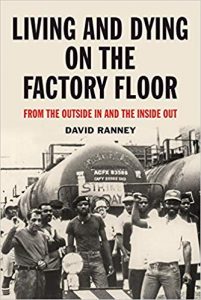 Ranney joined AWF to talk about his time back in the 1980’s working in factories and the conditions that he experienced. He explained that back then, factories were dangerous, unclean and difficult to work in, even factories that were unionized. Ranney said that when factories started shutting down and jobs began to disappear, workers were cheated out of their pay and pensions, among other things. On top of those issues, he said that there used to be immigration raids frequently, where immigration would detain any worker who was an immigrant, even if they were legally a U.S. citizen. Lastly, Ranney explained that as unions became more powerful, they helped make conditions, wages and benefits for factory workers better.

Sal Rosselli with the National Union of Healthcare Workers spoke about healthcare. He talked about nurses healthcare and how they are fighting to have healthcare coverage that is adequate enough and will cover any injuries that they may be exposed to while on the job. Rosselli also talked about nurses fighting to increase wages that will help them support themselves and their families. Lastly, Rosselli explained why the NUHW is supporting Bernie Sanders and Senator Elizabeth Warren during the next election.