Dolan talked about the differences between the North America Free Trade Agreement (NAFTA) and the United States-Mexico-Canada Trade Agreement. He stated that although there still needs to be work done to it, he likes the USMCA more than he likes NAFTA. According to Dolan, one of the bigger failures of NAFTA was opening up the southern border for long hauls for trucks because they did not end up meeting safety or wage regulations for their truckers. He said that in the USMCA, lawmakers focused more on trade sanctions and began to improve labor rights. Dolan stated that although it is a good first step in improving labor rights, there is still work that needs to be done with worker protections. 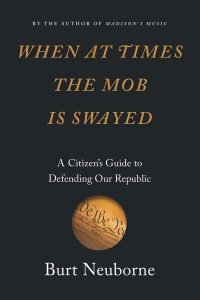 Burt Neuborne, author of “When at Times the Mob is Swayed” spoke with AWF on Sept. 25 about his book and saving democracy. Having sued every president of the United States since Lyndon B. Johnson, Neuborne proclaims himself as a person who stands up for the safety of our democracy, no matter what political party he is in favor of. He also discussed changing voting policies, such as when election day is held, mandatory voting like Australia has and opt-out voting. Finally, Neuborne explains why he believes big money should be taken out of politics and we should have publicly funded elections.