Rosemary Gibson, author of “China Rx: Exposing the Risks of America’s Dependence on China for Medicine” spoke with America’s Work Force on March 25 to discuss how the United States reliance on China negatively impacts the U.S. 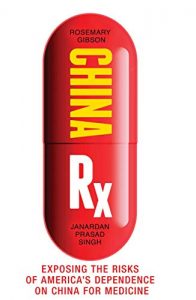 Gibson explained that the United States depending on China for generic drug supply was bound to backfire, and in the wake of COVID-19, we are seeing it first-hand. She said that many drug companies would buy generic drug contracts just to eventually sell them to China, flipping a quick profit. She said that after so many companies had done this, we centralized the major generic drug distributors in China, giving them all the power. When the COVID-19 pandemic hit China, they relied on their own resources to fight the virus. Now that the United States is also facing the virus, we had to turn to China for medicine, just for them to slam the door in our face when we asked for help. Gibson also said that China has been slow to send extra masks, ventilators and other safety equipment.

LaMont Byrd, Director of Safety and Health with the International Brotherhood of Teamsters spoke about what measures the Teamsters are taking to ensure their members are safe. He said that they have instructed their members to practice social distancing by staying home and limiting interactions with others. Byrd also said that they are actively practicing the six foot distancing rule, and will enforce better hand washing and hygiene practices. He also explained the symptoms of COVID-19 and how to stop the spread of misinformation on the virus.

AWF host Ed “Flash” Ferenc spoke about the COVID-19 virus, updated information on how we can slow and potentially stop the spread of the virus, precautions to take and what to do if you feel symptoms.