Lew Jennings, author of 19 Minutes to Live – Helicopter Combat in Vietnam, spoke with America’s Work Force on Memorial Day, May 27, about his book and his time served in the United States Army during the Vietnam War. 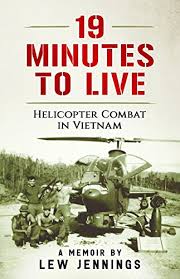 Jennings, who was a helicopter pilot during the Vietnam War, spoke about his back story from being drafted, to the hundreds of missions he was a part of during the war. He said that as a young boy, his father had taught him how to fly and he had obtained his pilot’s license by the time that he was a teenager. After receiving his draft card, which Jennings described as the worst day of his life, he went to the Air Force to sign up, who had told him he needed four years of college to become a pilot, as did the Navy, and the Marine Corps. Finally, the Army told him he could be a pilot for them, but he had to be a helicopter pilot. Helicopter pilots were in high demand, according to Jennings, because their life expectancy was so short and they needed to keep up recruiting to meet the demand.

Jennings described a few of the hundreds of missions that he went on and spoke about the difficulties he faced during them. After a year of flying helicopters for the Army, he was able to get out of flying and was promoted. After 20 years in the service, Jennings retired as an Army Officer with countless amount of awards and accolades for his service.

Larry Willis, president of the Transportation Trades Department joined AWF on May 27 to discuss the need to rebuild infrastructure all around the United States. He mentioned the roadblocks in congress that are preventing proper funding for the badly needed infrastructure improvements or repairs. Willis constantly stressed the importance of investing into the country’s infrastructure and how it could end up saving people money every year if the quality of roads and bridges were better.