John Ketwig, author of Vietnam Reconsidered: The War, the Times, and Why They Matter spoke with America’s Work Force on Aug. 28 about his book. 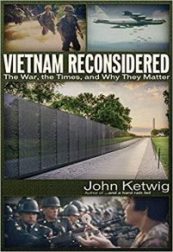 Ketwig, who served in Vietnam recounts the horrors that he and his fellow service members experienced during their time in Vietnam during the war. He talked about how he and his comrades saw and experienced such horrific acts and the post-traumatic stress that they brought back home with them after the war. Ketwig mentioned that the people who went and fought in the Vietnam War all came home changed people, and how they were expected to go back to their previous lives as if they had not just been to hell and back.

Ketwig also talked about auditing the Pentagon and how the last time the Pentagon was audited, it was a disastrous failure. He said that there was an incredible amount of fraud, needless spending, and many things unaccounted for. Lastly, he talked about the Pentagon holding statistics about veteran suicide rates and how they are soon going to stop allowing them to be public to prevent people from seeing them and potentially not wanting to join the military.

Mike Walden, president of the National United Committee to Protect Pensions spoke to AWF on Aug. 28 to discuss the Butch-Lewis Act, House Resolution 397. He also talked about Virginia Foxx and her dislike of multi-employer pension plans, and her anti-union views.

AWF host Ed “Flash” Ferenc spoke about Uber drivers in California going on strike until the misclassification of the drivers as independent contractors rather than employees gets resolved.