Kris LaGrange, host of UCOMM Blog spoke with America’s Work Force on Oct. 3 about a union that is in support of President Trump’s re-election.

LaGrange discussed his office being vandalized by, who he thinks are fans of a company that he spoke out against. LaGrange spoke out against Barstool Sports President, Dave Portnoy, after he threatened his workers with termination if they decided to unionize. LaGrange, not happy about hearing this, called him out and soon thereafter the UCOMM office exterior was vandalized, believing it to be Barstool Sports fans who are trying to silence him from speaking against Portnoy. 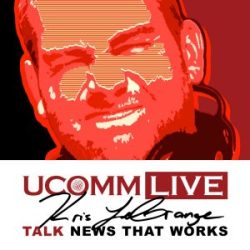 During further discussion during his interview, LaGrange talked about the International Union of Police Associations being the first AFL-CIO affiliated union to be in support of President Trump’s re-election. He said the IUPA claims that President Trump has done more for police than President Obama and that is why he has their support. LaGrange pointed out that President Obama was also a big supporter of police and their union.

AWF host Ed “Flash” Ferenc spoke today about AFL-CIO President Rich Trumka standing at the picket lines with UAW striking members telling them that they have the support of the millions of AFL-CIO members.