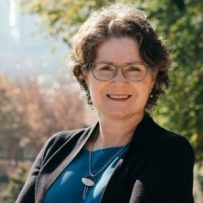 Linkon discussed the current trend in college scandals of parent paying large sums of money to a school so that their underqualified children can get accepted into elite schools over people who actually deserve to be admitted. She described this as parents being “snowplow” parents by getting rid of every obstacle in their kids way to make things easier for them, rather than have them work for it. On top of this being illegal, Linkon described it as unethical and robbing another student of an opportunity that they had put in the honest work for and deserved. Lastly, she talked about how the area that a person grows up in could influence the level and quality of education that is available to them.

Lisa Jordan, director of education and member development with the United Steel Workers spoke to AWF on March 22 about a leadership program within their organization. She said that this program is one week, once a year, for four years. During this program, Jordan said that it activates members and gets them acquainted to their organization, works on strategic planning, collective bargaining skills, and then helps them pick a specialty in their organization. She said that she hopes that other unions begin to launch union leadership initiatives to help strengthen unions.

AWF host Ed “Flash” Ferenc spoke about Michelle Obama’s book tour and the labor issues with the crew in Cleveland.