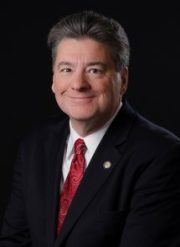 Rep. Patton first talked about the dangerous effects of vaping, and although a better alternative than cigarettes, are still harmful. He discussed how the packaging and the familiar flavors of the vape products are enticing young people to buy vape products. Patton said that this is a major problem, having underaged kids become addicted to nicotine, and how there is legislation being drawn up to help combat this problem. He said one way to make it harder for younger kids to obtain vape products is to limit the accessibility to them. Although tobacco products are age restricted in Ohio, having to be 21 or older to enter a tobacco store, vapes and vape products are available at gas stations where anybody is allowed to walk in. Patton suggested making stiffer penalties enforceable on facilities caught selling vape products to underaged patrons in hopes that will make it more difficult for a kid to get a vape.

Denise Weller, co-founder and executive director of Hearts for Patriots joined AWF to discuss what her organization does. The Hearts for Patriots organization helps caregivers of veterans with post-traumatic stress disorder (PTSD) better understand their spouses struggles by providing them with resources to help offer better support. Weller also talked about a fundraiser called the Steak Fry Fundraiser where proceeds are put towards providing resources to better understand how to help a person cope with their PTSD.

AWF host Ed “Flash” Ferenc spoke about Oregon and southwest Washington workers go on strike after 15 months of poor bargaining with their employers.