Ted Howard, co-author of the book The Making of a Democratic Economy: How to Build Prosperity for the Many, Not the Few spoke with America’s Work Force on Wednesday, July 31 about steps to take to build a more democratic economy. 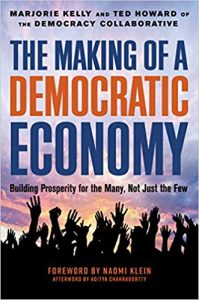 Howard first spoke about the Democracy Collaborative, which he co-founded. He explained how they work to create a new economic system to have more inclusive outcomes for different groups of people and promote sustainability. He also discussed his book and the steps that the United States needs to take in order to build a more democratic economy. According to Howard, the three steps are; impact investing in the economy, a public banking system and protecting and strengthening pension funds. He said that we need to take collective action for the common good if we want to build a democratic economy which allows all groups of people the opportunity to flourish.

Melanie Shakarian, Director of Development and Communications for the Legal Aid Society in Cleveland, Ohio spoke with AWF on July 31 about creating the country’s first right-to-counsel legislation when dealing with housing cases. She talked about wanting to do this because everyone deserves a fair shot at representation when it comes to keeping a roof over their head. Shakarian also talked about the Legal Aid Society and how they receive funding from the Ohio Legal Assistance Foundation and grants from institutions around the area.

AWF host Ed “Flash” Ferenc spoke about workers in Texas dying on the job as a result of poor working conditions.